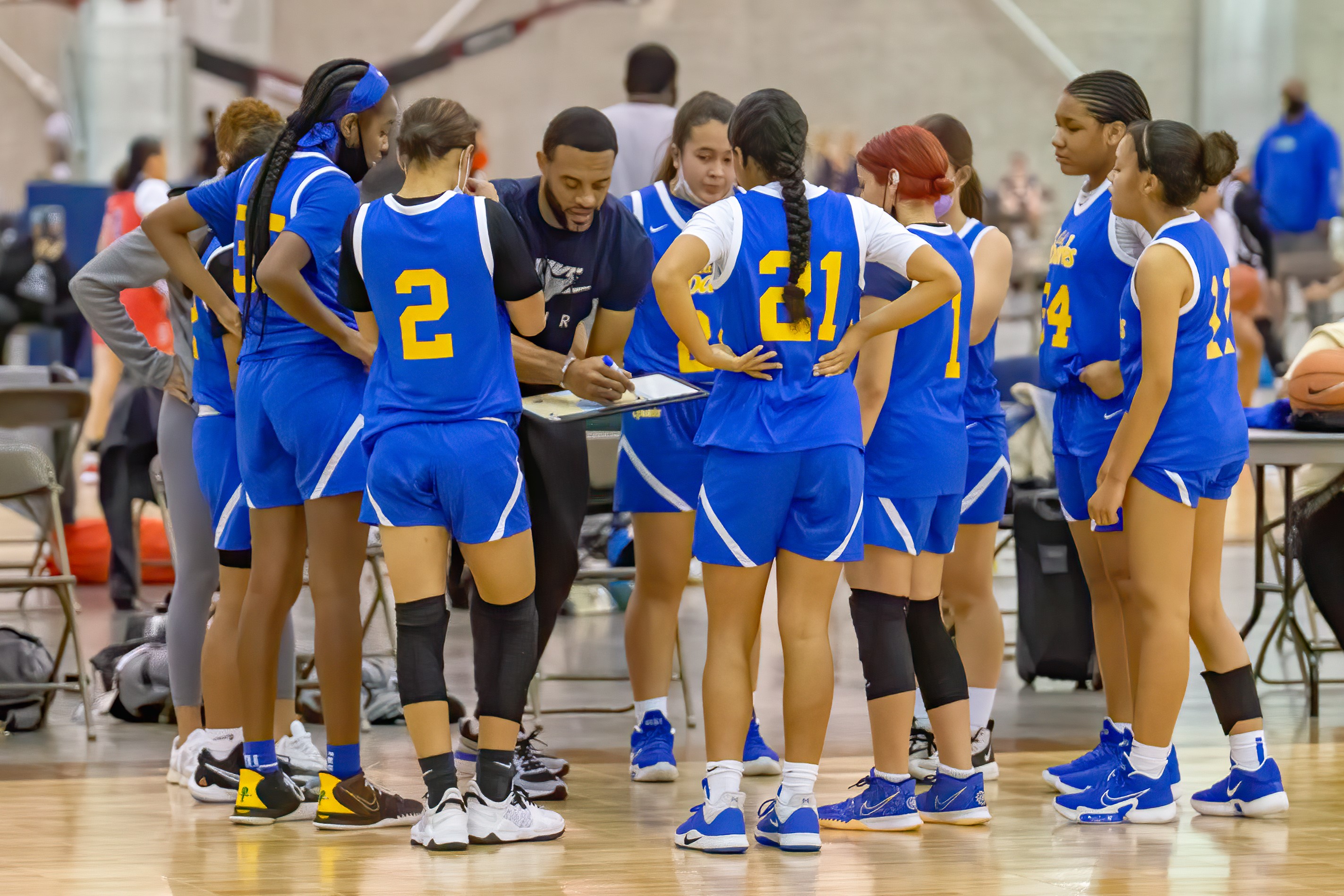 “To be the best team at controlling the controllables.” That’s one goal Coach Dominic Freeman has for his team.

“If we can do that, then everything else will take shape,” he says. “Obviously we want them to win on the court,” he says of his athletes, “but also to win off the court, and that’s the most important thing for me.”

“Get them to be champions of character.” That’s another goal Coach Freeman, head girls basketball coach at Capistrano Valley Christian Schools, has for the team. “If I can do that and give them the best experience and they have a great time; as long as they’re good and happy and they got something out of it, I’m happy at the end of the day.”

And character is one of the things Coach Freeman looks for in an athlete. While talent is important, he says, it isn’t everything. “Are they a good person? Do they have morals and values? Because at the end of the day, they could be the most talented kid on the court, but to get to those different endeavors they want to accomplish, they have to have something behind them that keeps them disciplined and level-headed.”

Because there’s going to be ups and downs, Coach Freeman says, character is important to help sustain the trials and tribulations that are bound to happen.

“Adversity is a great tool to learn from, and I welcome that,” he says. “It’s not the most comfortable thing, but I always tell my players: ‘You have to be comfortable with the uncomfortable before you can have growth.’”

So how did Coach Freeman get into basketball? Standing at 6’1” in Walton Middle School where his father taught, he was always asked to play basketball. “I was probably one of the taller kids on campus,” he says.

Anyone that was Coach Freeman’s height when he was in middle school played basketball. “I wanted to hang out with my friends,” who were playing basketball and other sports – football, soccer, baseball.

Coach Freeman also played football. “And I did love football,” he says. “But most of my friends were getting hurt and my parents didn’t want me to ruin an opportunity that I could possibly get as far as playing at the collegiate level.” So he played basketball, and then transitioned from playing to coaching.

“One of my former coaches who coached me in high school got the gig as a head coach at Midland High School and asked if I wanted to get into coaching,” he says. “And it just took off from there, and I’m still coaching.”

Coach Freeman is the same person on the court as he is off of it. “I try to keep both synced. I love working and being with people who are inspired. And I’m a big family guy, so I try to incorporate those things on and off the court.”

Coach Freeman is inspired by his parents. “My dad and my mom, they go hand in hand. How they hold hands every day, they’ve been the staple of my life,” he says. From a male perspective, he sees how his dad handles things. “He’s someone I look up to quite often. He’s the staple of our family and my mom is the champion of our family, and those two can’t be disconnected.” Seeing that inspired Coach Freeman to brin the family atmosphere to what he does in his program. I’m thankful that they’ve bene in my life and they are my parents.”

His biggest accomplishment as a coach: “When I get a call from a from a player who just wants to say, ‘Hey Coach, how are you doing?’ And this is after they graduated, and that means more to me than anything. It means that we’ve made an impact in their life and that’s everlasting. I appreciate those moments and don’t take it for granted.”

Two coaches currently with Coach Freeman used to play for him. “They’ve now done full circle and are coaches with me. So it’s one of those things where you just feel like you’re doing something right. Because they’re not celebrating that they’re leaving, they’re finding ways to come back.”

Before a game, Coach Freeman likes to visualize – not just things that go well, but things that don’t go well. “So I’m mentally prepared for it. So I’m not shocked when it does happen,” he says. He also likes to meditate.

He advises players to visualize success and visualize things they may struggle with and how they’re going to handle it. But he’s not the coach who micromanages. “I want them to be their own problem solvers out there.”

He also tries to get to a place of calmness. “So that when I’m coaching there’s a calmness out there and I’m not adding to the chaos. Hopefully I’m helping them getting through whatever we need to get through that day,” he says.

For athletes interested in a career in coaching, Coach Freeman advises: “Go out there and try it.” When he first started coaching, he got the same excitement as when he was still playing.

It’s also important to understand that coaching is a process. “If you’re getting into it just for winning, then it’s probably not the right reason to do it,” he says. “You have to have a heart into helping and serving others. And the satisfaction of seeing joy that comes out of someone having success that you helped him with.”

He also advises coaching different levels. “From the little ones where it really will force you to really be a good coach and learn how to break things down, from high school and working with different attitudes – try all levels.”

It’s something Coach Freeman did himself. “That’s something I’m grateful for is being able to coach all types of levels and understanding the development process. You get a gist of

where a kid should be and their level of play.” Coaching different levels helps with developing patience and understanding the process, he adds.

Now something Coach Freeman’s fans may not already know about him – when he worked at Disneyland, he trued out for Sully from Monsters, Inc. “That gives you insight into how big of a kid I could be,” he says. “I tried to go for Goofy, but I was too tall.”

Coach Freeman’s advice to his athletes and anyone pursuing a goal. “If it’s something you really want to do, then it’s not a sacrifice. And find time and ways to better yourself and feed yourself with knowledge and information.”

2 thoughts on “Coach Dominic Freeman: ‘We want them to win on the court, but also to win off the court.’”