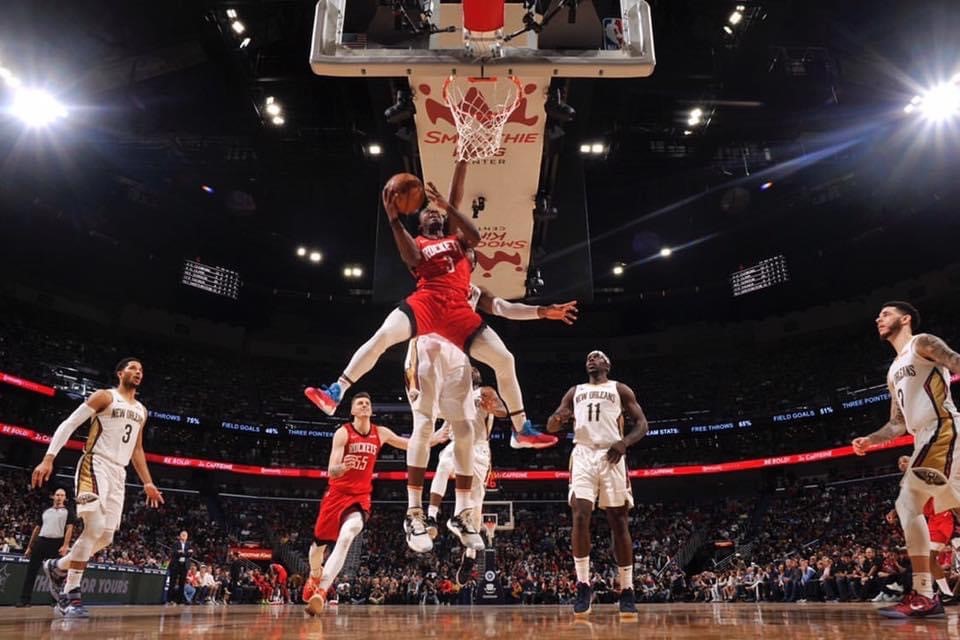 With 30.1 points per game in his senior season, Chris Clemons led the NCAA Division 1 in scoring and became the third-highest scorer in NCAA history. His college basketball career is full of awards and highlights. But he went undrafted in the 2019 NBA draft.

Then, Chris, standing at 5’9” joined the Houston Rockets for the 2019 NBA summer League, followed by the signing of a three-year deal. He made his NBA debut on November 3 that year, scoring 16 points for the Rockets against the Miami Heat. So how did he overcome the obstacles and adversity to get to where he is today?

“You have to have faith when you’re taking a step like this,” Chris says. Of all the college players that enter the NBA draft, only a small number actually get drafted. “A lot of them enter the league undrafted or go through a two-way process or G-league,” he says. “There’s a lot of ways to get into the league; being drafted isn’t the end-all be-all when it comes to actually getting into the league.”

“It’s really difficult to make it into the NBA,” Chris says. “But I I’ve always known that the work I put in would ultimately get me to where I wanted to get to.”

At the age of 23, Chris is grateful that he’s seen many of his dreams come true. “I’m still young, and I have a lot of dreams ahead of me. But up to this point, I’ve made it to play D1 basketball – that was a main goal of mine. I’ve graduated college, I got my degree. I made it to the NBA.” He’s also had his high school and college jerseys retired.

“I’m also very fortunate,” Chris adds, “to be able to put my family in a good situation. It’s important for me to be able to give back to the people that helped me make it to this point. Me being able to help my family, and make sure they’re okay and comfortable, and that’s another thing I’m super proud of being able to accomplish.”

As an athlete, he’s motivated by many things, including trying to achieve his dream, taking care of his family and giving back. “Making sure my future kids are going to be okay, making sure my family is okay, and making sure that I’m giving back in some type of way,” says Chris.

Chris’ advice to kids who want to follow in his footsteps – don’t forget about the student athlete part of the game. “High school kids often forgot about the grades they need to make it to college. The first step is to make sure your grades are right,” he says.

Pursuing a career in the NBA is a journey, Chris says. “Keep your circle small. Make sure you have good people in your corner. People are going to try to attach themselves to you – make sure the people around you are with you for your best interest and not theirs, and that will help you focus on your goals.”

Chris’ circle includes his parents, his stepparents, his siblings and his 2-year-old nephew. “I talk to my family as much as possible,” he says. “We laugh and we joke all the time. The people who are for you and not for themselves, those are the people that will always be close to me. And I will always do whatever I can to help them. Definitely a whole lot of love for my family.”

And when choosing a college, Chris advises: “Don’t for the hype. Don’t go for the school that’s always on TV; choose a school that’s going to best suit you and your game.”

He’s personally seen talented athletes choose schools that weren’t right for them and ended up getting lost in the shuffle as a result. “Do the research about the school and the system you’re playing in and make sure it matches your style of play,” he says.

Being able to inspire others is what Chris is most proud of in his career. “That people can look at my story, see similarities and relate and feel like they have hope in making it to this level,” he says. “I didn’t take the traditional route, not highly recruited, not drafted – all that adversity is something that most people face.”

That Chris achieved his dream in a non-traditional way, he hopes, will inspire kids. “I can share that story with them and they can relate and I can be around these kids that are looking for the same goal — that’s very important for me.”

Giving back to the community is important to Chris. He’s recently sponsored the boys basketball team for his former high school – helping to train the players, giving them tips and attending their games in support.

Chris also believes it’s important for people like him, people who have a platform, to encourage others to stand up for what’s right. He took part in the June 2020 downtown Raleigh peaceful demonstrations after the murder of George Floyd. “Being part of that movement and the protest, was one of the most powerful moments of my life to fully participate in that activism. It was something I’ll never forgot. The energy and the passion that people of all races were bring to the situation and bringing to the moment of such a conflicted time in America that’s been going on for a long time.”

During the 2020 basketball season when NBA players wore jerseys with social justice messages, Chris chose the phrase “Justice Now.” He chose it “because it shows the urgency of making a change, not sitting back and continuing to let things like this happen without people hearing your voice and pushing for something better. ‘Justice Now’ embodied that.”

Chris’ inspiration is his father. “Just seeing the sacrifices that he made and continues to make for his children, his family, his mom, his dad, his sisters, everybody around him. He’s such a selfless person, and he’s always done everything he can to help his children achieve their goals.”

A recent favorite moment on the court isn’t from a game, but from a practice session with one of his favorite teammates, Tyson Chandler. “He’s a champion, he’s been in the league 19/20 years which is a rare thing to do. Just shooting against Tyson, doing a 3-point contest – that’s one of my best memories from last year.”