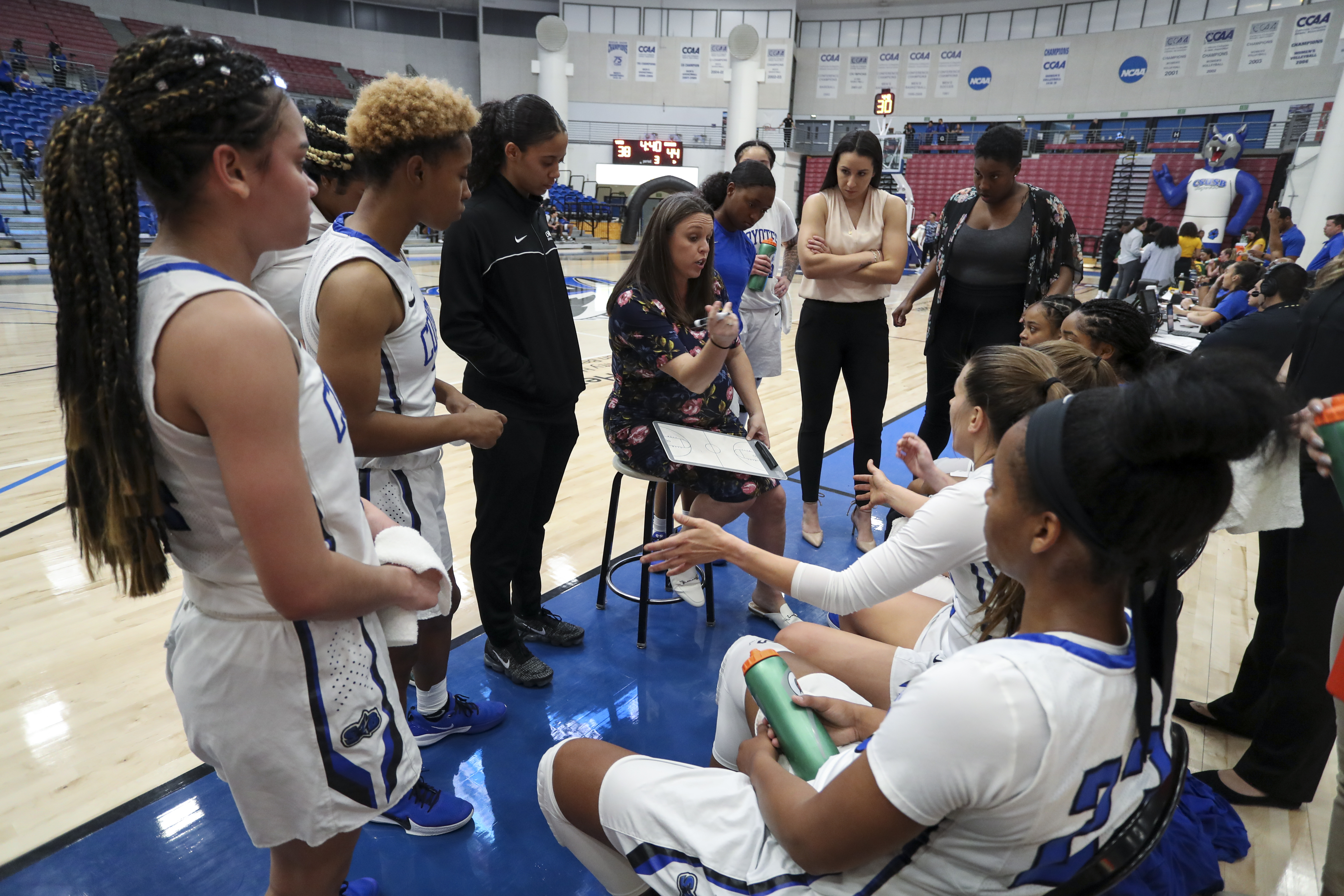 If a teammate falls on the ground during a game, are you the first one to run over and help them up? If so, you may catch the attention of Coach Casandra Renno.

When recruiting athletes, Coach Renno, head women’s basketball coach at Cal State San Bernardino, isn’t just looking at how well they play, but how well-rounded they are. “We want someone who has good character, someone who’s self-motivated and self-driven, someone who’s going to be a role model for the community,” she says, adding that academics also play a factor.

Coach Renno started playing basketball in elementary school. “We’re a very sports-oriented family, and I grew up playing sports,” she says. Though basketball was not her first sport. “I grew up in a soccer background. My dad is the biggest soccer fan I’ve met.”

Coach Renno played basketball, soccer and softball. And in eighth grade, she chose basketball. “It actually came down between soccer and basketball. I made that decision to give up soccer,” she says, adding that she knew she would flourish in basketball. “And I had the right coaching, and had really great mentors along the way to help me.”

Now a coach, she doesn’t just teach athletes how to play, but also focuses on mentoring. “I love being a part of these young people’s stories, and I just want to keep giving back where I can. That’s something I want to continue, to help young people, not just my staff, but just other people I’ve met along the way. Continuing to show how to do things the right way and being a positive support.”

Her philosophy on coaching includes teaching her team life skills and getting them ready for the world, and she does that by modeling it herself, both personally and professionally. During the pandemic, she’s focused on her team’s academics and their well-being. “We’re not physically together, and we really want the team to have a cohesiveness,” she says. She’s doing this by “continuing to make sure everyone’s health and mental health is doing well, through checking in weekly and making sure we’re doing everything we can as coaches to help them.”

Coach Renno even started a virtual book club in February that’s led by the athletes. “We don’t lead it as coaches. We log in, we listen, we chime in, but for the most part, the athletes control it,” she says. “We continue to challenge them outside of the bubble. ‘How can we continue to get better? How can we push ourselves?’ There’s a lot of things that are not basketball-related right now that we’re doing to help.”

Her advice to athletes when recruiting them: “Enjoy the process. Enjoy being loved and wanted and cared for, because it’s a great opportunity and it’s an indescribable feeling when you get that offer.”

And in describing when she received her offer to join CSUSB, Coach Renno says, “It was very surreal.” She was at dinner with a good friend in Long Beach when she got a call from a 909 area code. “My friend said, ‘You’d better answer it.’ And I did.” It was Shawn Chin-Farrell, the athletic director at Cal State San Bernardino, offering her the position. “It’s a moment in time that is definitely in my memory bank. You just kind of freeze when you get the opportunity and see all your hard work pay off. I just couldn’t be more excited about it,” she says.

Coach Renno is very motivated about her role. “With any job or anything you want to do in life, someone wants your job and they want to do it better than you,” she says. “Every day when I get up, I think about how I can continue to push myself to be the best that I can be for my staff, for my coaches, for my recruits, for my daughter, for my marriage.”

Her advice for women interested in this career path: “You’re recruiting all the time. Whether you’re in season or out of season, you’re meeting people. You’re being polite. You just don’t know who’s looking.” And she says it’s important to always be preparing for the next step. “You’re not working for the job you have now. You’re working for that next job.”

Before a game, Coach Renno does deep breathing. “You calm yourself and you do visualization to put yourself in the scenario of what it’s going to look like,” she says. And she chews a lot of gum, which helps calm her nerves. Her favorite flavor is Extra Spearmint (and Extra Polar Ice is the backup.) Staying calm and in the moment has been especially important this past season, since Coach Renno was pregnant during that time.

Off the court, Coach Renno is a military wife, married since 2005, and mother to Ella Attison, who was born just days after her team’s last game for the season last year. “She’s a real coach’s kid,” she says, carrying Ella Attison. “I love being a mom.” Even through a virtual interview, her passion shines through.

Coach Renno’s heroes are her parents and her husband. “Those three have just continued to support me through the thick and thin, and they’ve just been my rock,” she says. “My parents sacrificed so much. And my husband is a very supportive spouse and has always supported me in everything that I’ve done.” And something Coach Renno’s fans may not already know about her. She’s an avid Friends watcher. It’s even part of her daily jokes with her husband and close friends. “I go to sleep every night watching Friends. Even if I watch a movie before, I always put it on to go to sleep.”